The Title Of My Thesis Paper: “Real People Acting Out Interpersonal Issues With Paper Representations” 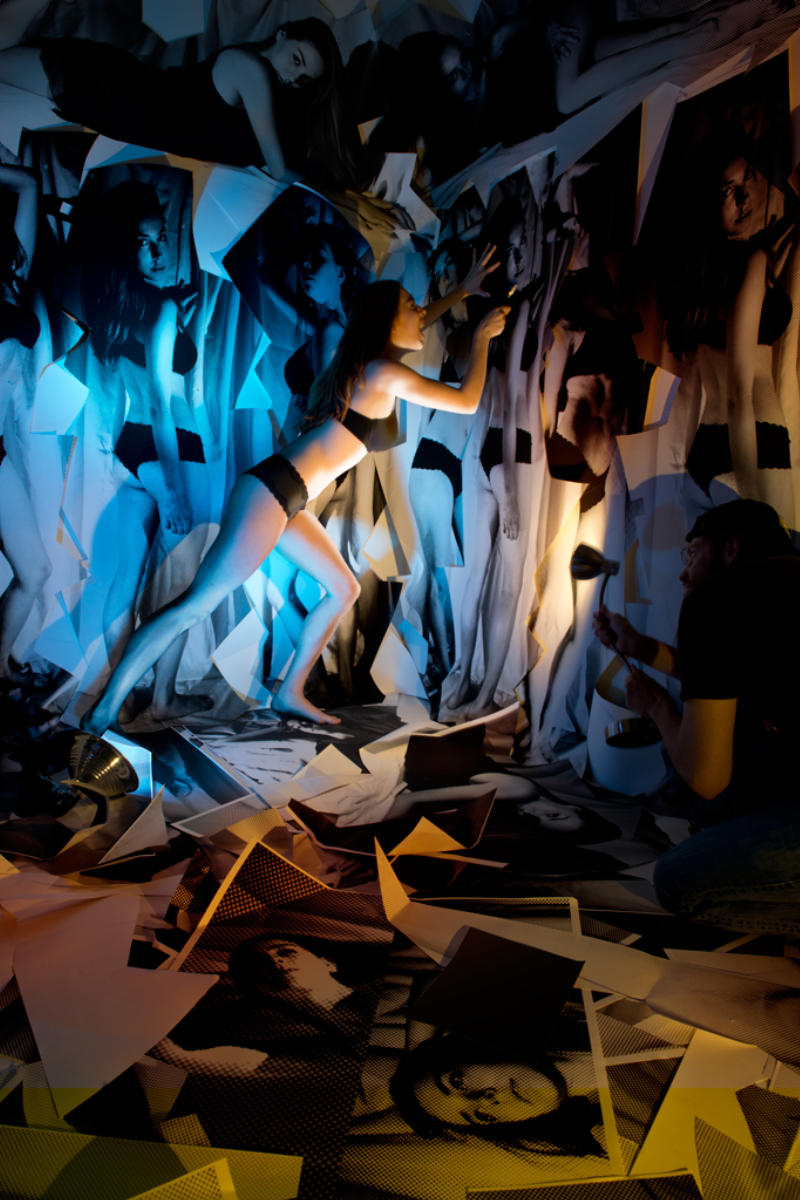 Society Hungers …For People At Their Worst
We’ve been conditioned by movies, reality TV shows, social media websites, and news programs that people should act in improper ways in order to become famous.
I came up with the idea of this image after watching the 1969 movie “Blow-Up” by Michelangelo Antonioni, and the voyeuristic tendencies presented in the 1954 movie “Rear Window” by Alfred Hitchcock. Today images and live streams of people on social media websites can be viewed as soon as a person clicks the “go live” button; instantly trying to be famous.
Set in a photographers studio paper representations of the woman are hung all over the walls and loiter the floor. The model can not escape her own perfect image literally and figuratively. She struggles mentally with the images of her representation. The encapsulated image from the time she had the photograph taken of her represents the best she will ever look physically.  She knows with age she will need to maintain her body’s perfect form and health to stay looking like the day she took these photos. With frustration she takes a knife to one of her paper representation’s on the wall. 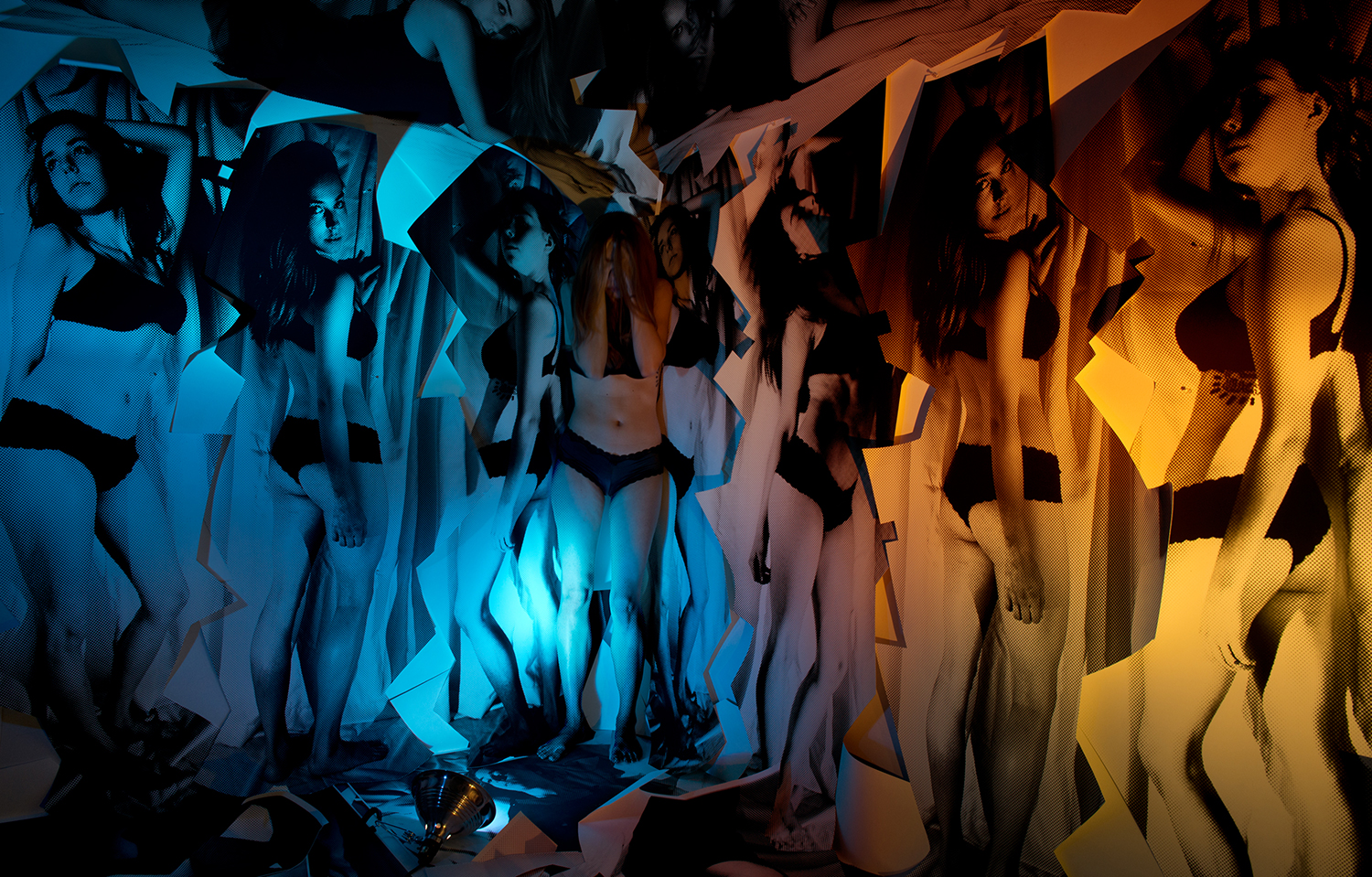 Halee In The Middle
I did an initial photo session with the model, then bring the images into Photoshop to desaturate and add a Ben-Day Dot filter (i.e., Roy Lichtenstein). I print the images life size for the actual photo shoot of the artwork. In this piece I pinned the life size paper women to the wall (i.e., Yves Klein). A blue light is cast onto the pinned paper women and the real woman to approximate the blue paint on Klein’s female models. I also use the blue light cast onto the real woman as a metaphor for the woman turning into paper, which is another way to desaturate the flesh of its color. I use blue light as Klein used blue paint–because bright blue is not often seen in daily life. We are familiar with white and yellow lights in our houses and work, so the saturated blue suggests fantasy and abstraction. 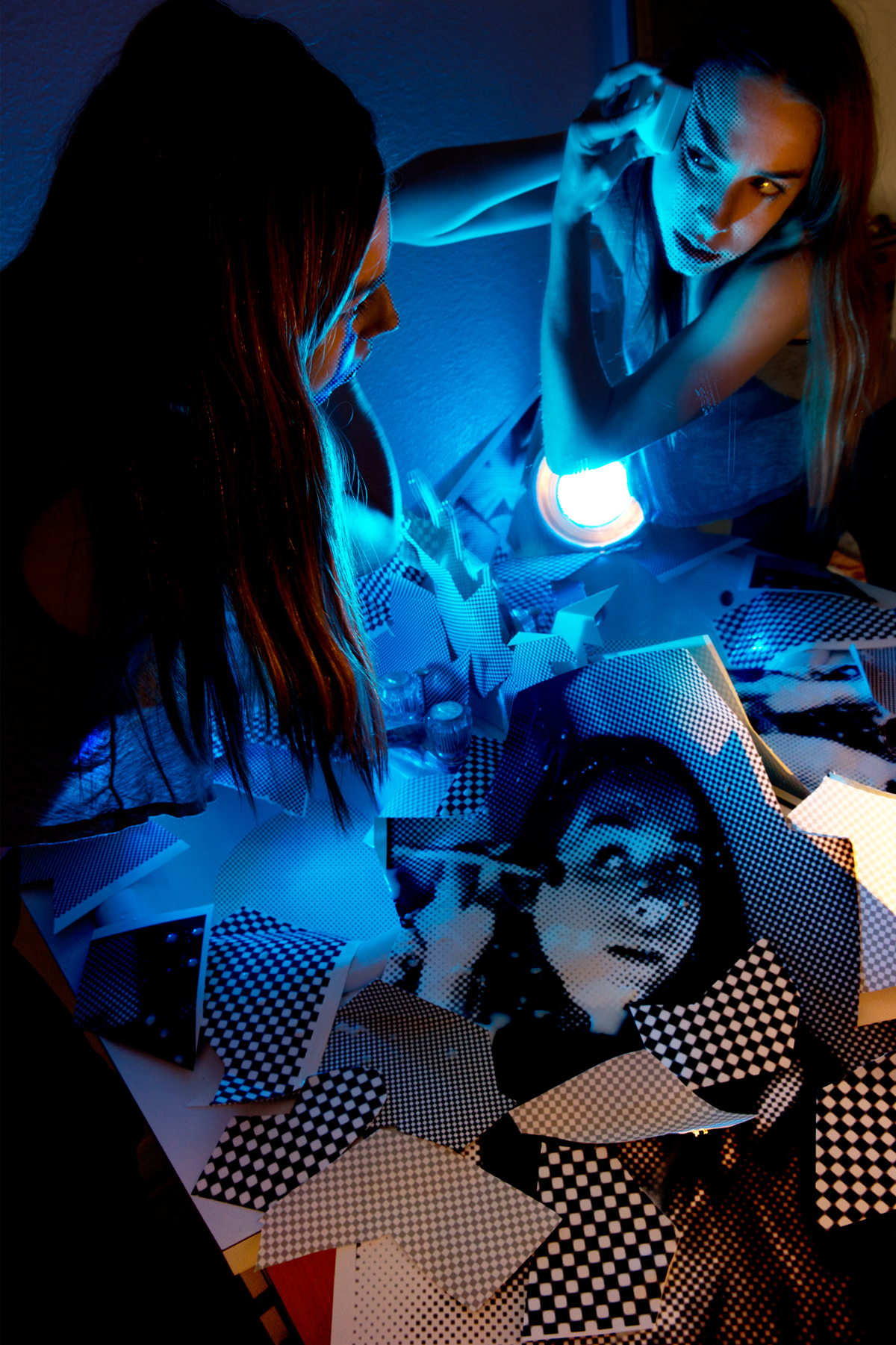 All the Cool Girls are Doing It
The art speaks about consumerism and the newest trends. Magazines, social media, and online internet ads pushing the latest craze in makeup, or outfits for women, and how this leads to pressure on women to look a certain way. She is scrubbing the mask off of her face. The paper pieces scattered around the sink are the remnants of the multiple sessions to get the makeup to look ‘just right’. 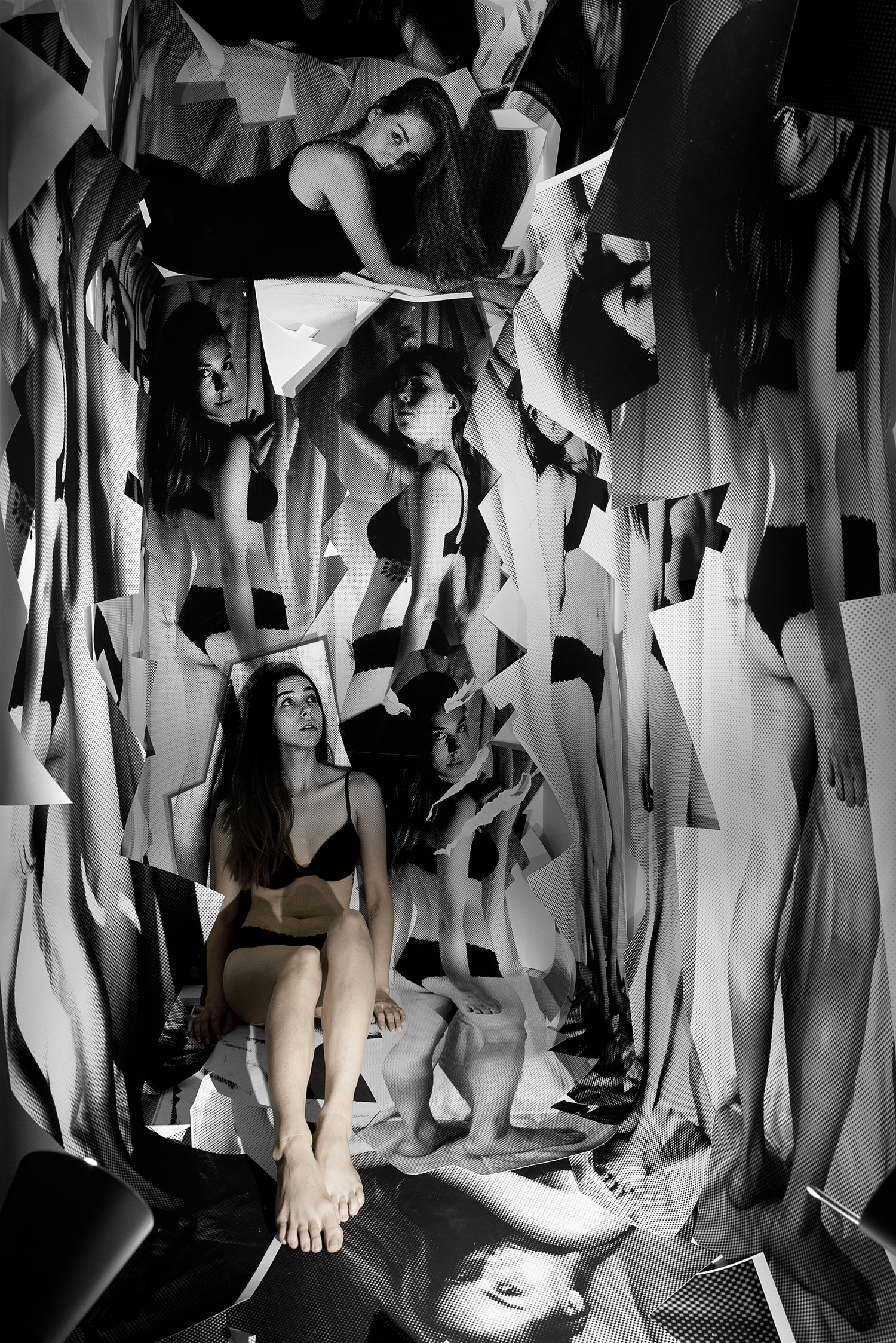 Self-Approval
Inspired by Vanessa Beecroft. Conveying a claustrophobic and self-critical analysis by surrounding the model with multiple paper representations of herself. Showing the chaos and carnivalesque figures women project on their own self image and of the pressure our society places on women to look a certain way. Her own image is distorted from the camera showing large feet compared to her tiny head while the top half of her morphs into a paper mask of the same representations. 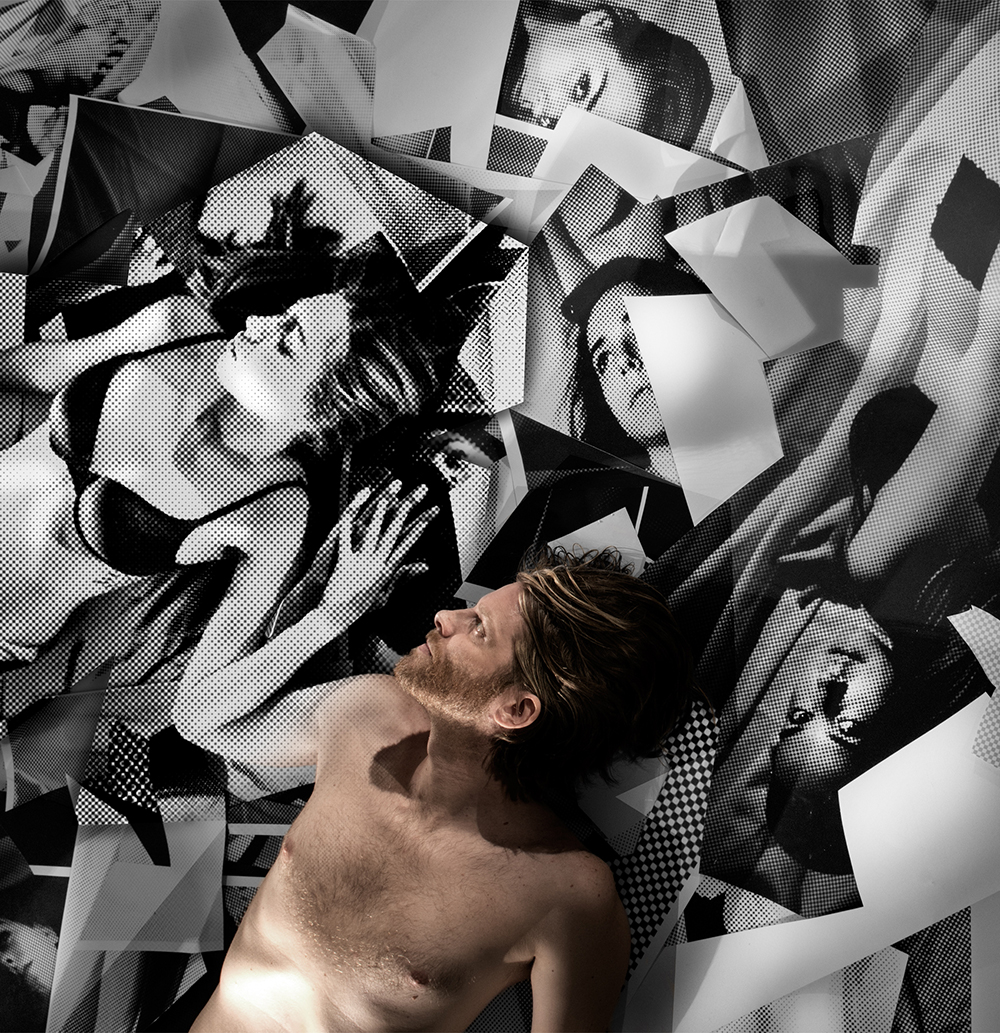 Her Agenda
Her agenda is about a man who wants his partner to connect with him. I utilized my interest in visual tracking to reinforce the implied narrative. I wanted viewers to look at the human who is in color in the piece, and follow his gaze to the left toward the woman. Reading the image from right to left relates to going to the past for Western culture. She is also positioned dominantly higher than him and looking away. Our eyes are directed to the paper woman on his immediate left, then upward to the right, in a clockwise direction. Next, we visually traverse the other women’s faces down along the right side of the picture until our eyes have returned to the man again. 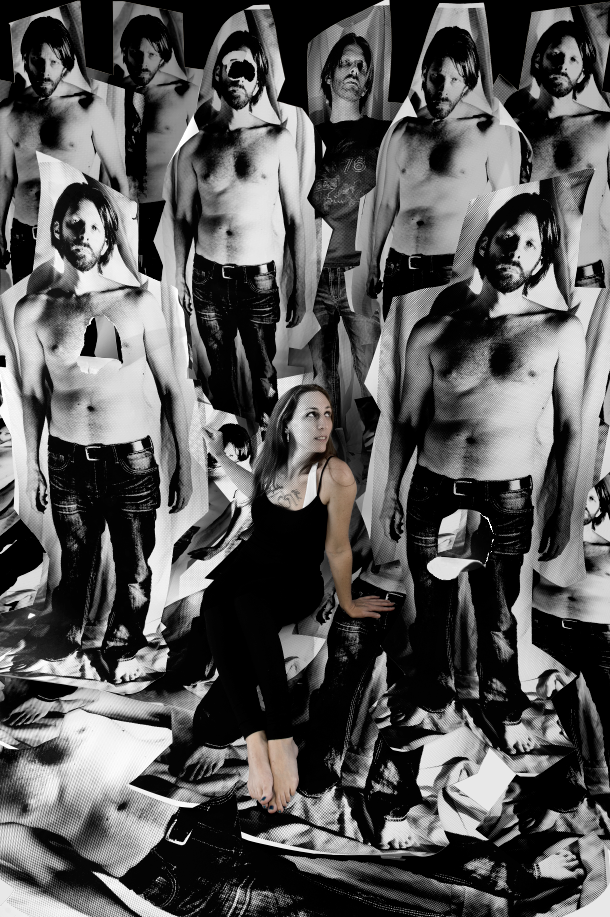 …But Other Opportunities Come Along
When someone is in a failing relationship and they don’t want to do the work to fix it and they see someone else that entices them. 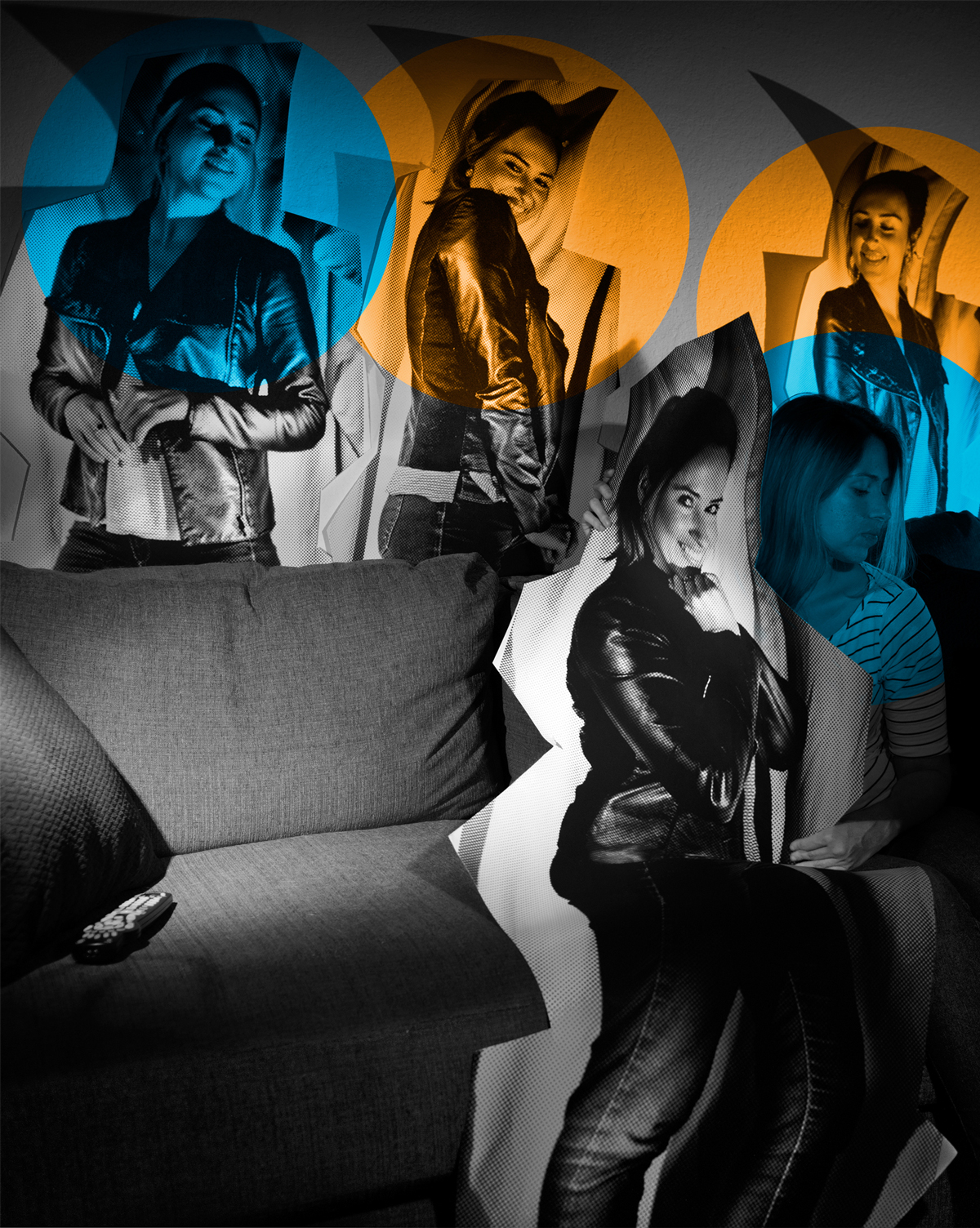 A-void
The model holding a paper representation of her “other” self, suggests that she is happy, but the “real” model looks indifferent. She explained that she has to put on a smile when out in public or meeting someone on a date.

The spot light onto the empty spot on the couch implies the presence of a potential suitor making the paper representation she is holding into a shield and mask.

While digitally manipulating this image I though of John Baldessari. He is famous for placing colored dots over people’s faces, forcing us to ask what the image is communicating. Unlike Baldessari I wanted to show the expressions on the faces and relate the matching colored circles to connect the narrative. 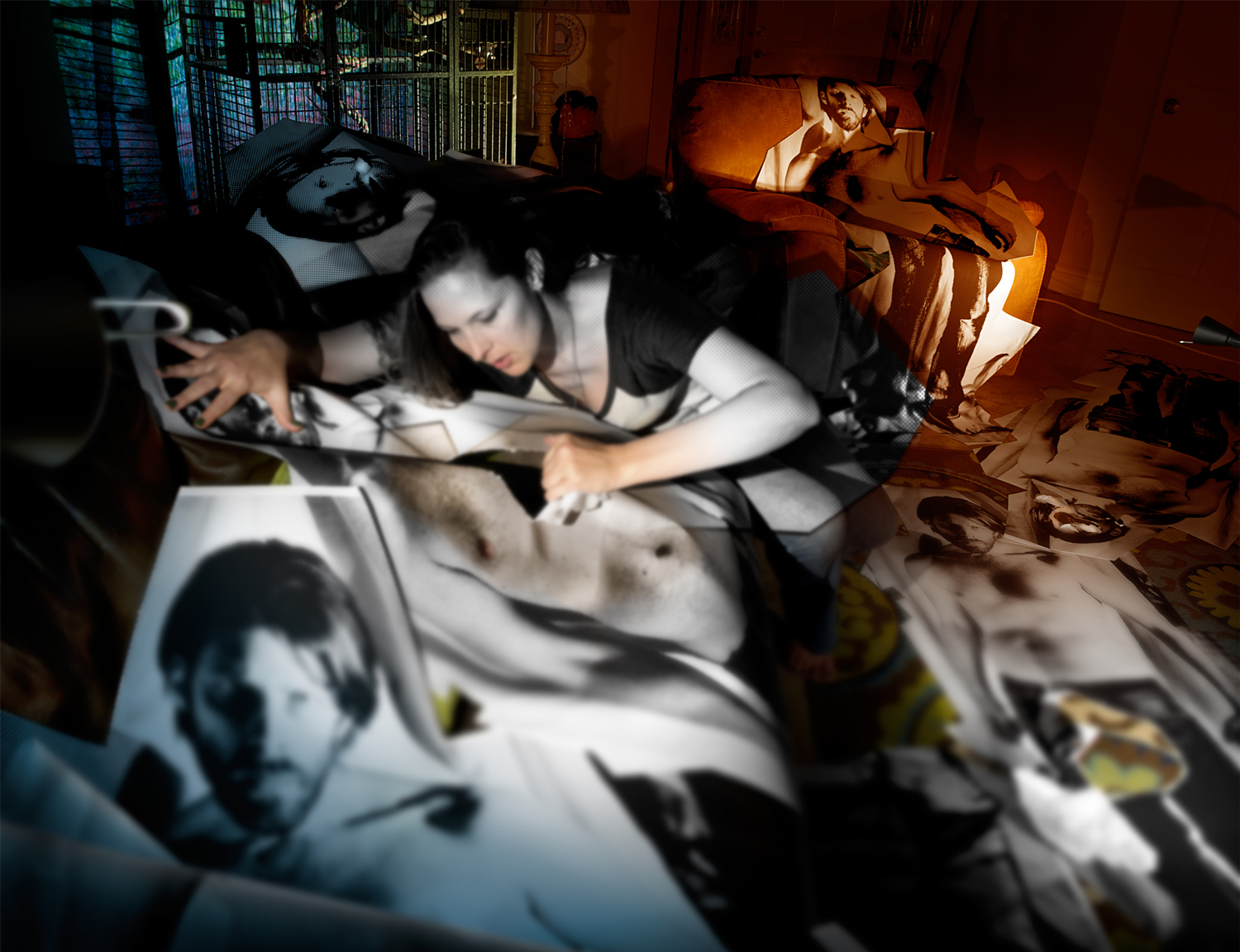 The bottom half of the image shows her struggle to find the missing pieces. The top half shows a paper representation of a man sitting in a chair looking at the scene as if to say “Here I am, just ask me.”

I added flesh tones to the paper man where Ashley is ripping a hole out of the heart area, making the paper man seem more human. Importantly, this is the first work where the paper image begins to morph into a human being. This is significant because, until this moment, my images were about human beings turning into paper. I wanted to emphasize the paper man in the chair more than the spectacle of Ashley ripping the heart of a paper man.

In terms of his location in the picture, the paper man in the chair looks further away from us than Ashley. Moreover, he is smaller than Ashley, making him seem still further away. Applying a warm bright color in that area paradoxically pulls him still closer. And yet, the foreground image of Ashley also has been blurred. These contradictory indicators of spatial perspective inspired me to consider the art of Hans Hofmann and his “push and pull” technique, in which colored shapes move in and out of the space of an artwork. The color in my “backgrounds” caused negative spaces to project forward and to make my artwork look flat.

The eye tracking on Missing What’s Missing is difficult to interpret. When I look at the picture, I am drawn to the middle where Ashley’s image is, but then I very quickly avert my gaze to the paper man in the chair. I think that this is because Ashley is blurred and hard to see, and my brain does not want to struggle with the blurry parts. I enjoy this piece because the colors, light, and shadows are sensual. Even though the blurry areas are off-putting, I cannot stop staring at the piece. I asked Ashley for her thoughts on the completed artwork, to which she replied, “I totally get the feeling of being so done, but still have so many pieces it’s hard to let go of.” 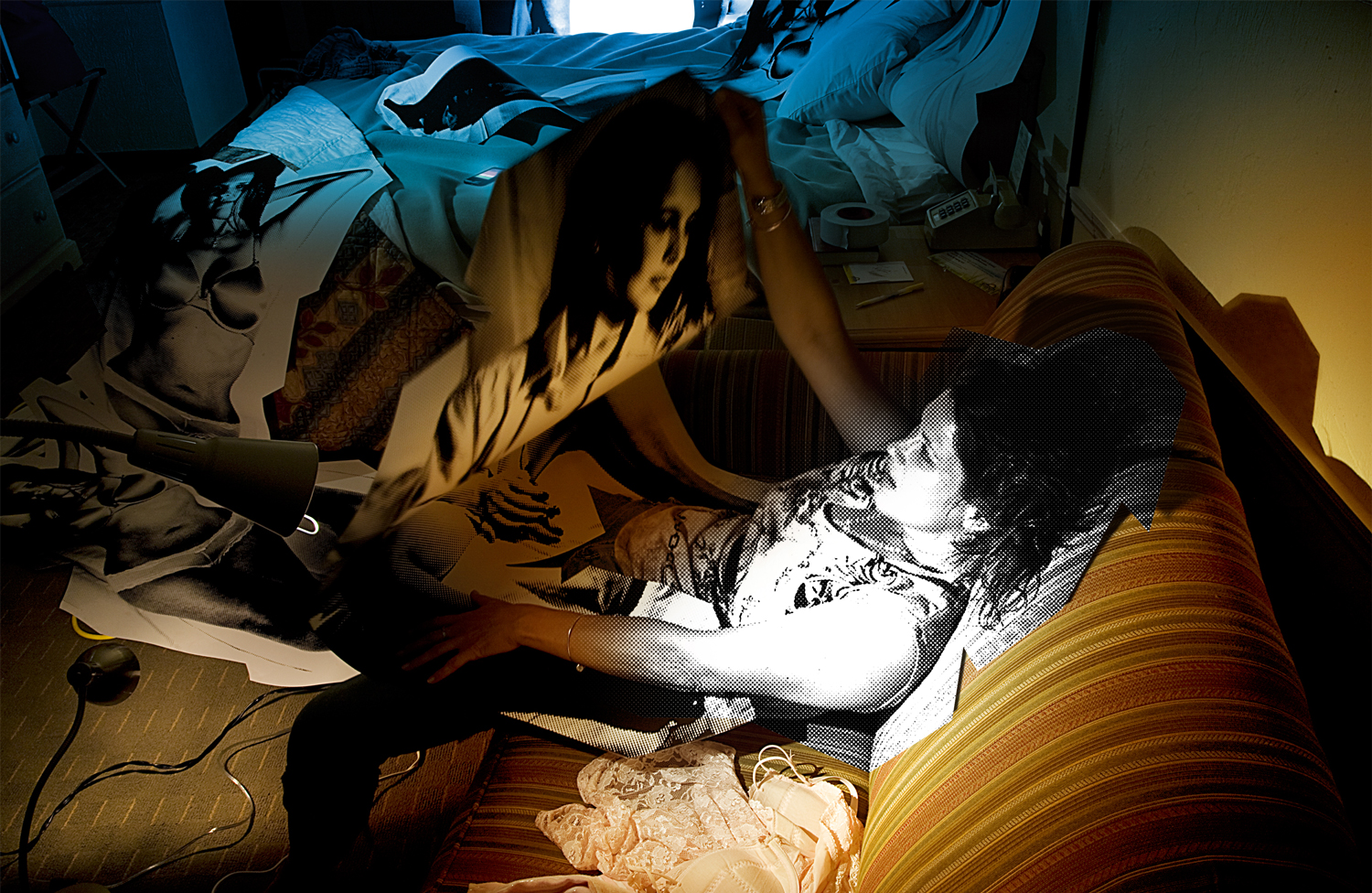 Her Own Judgement
Serendipity was the image that sparked my thesis, but this image of the model sitting with the paper representation was the spark for what my thesis would be about.

Inspired by Gregory Crewdson, I rented a hotel room, and took photos of the living model interacting with paper representations for self-critical analysis.

The model holds a paper representation on top of her in a dominating pose. The gaze of one woman admiring another woman even though the latter is made of paper. From my conversations with the model she believed that she was overweight. This was the moment that self-critical analysis by the depicted women came into my work.

I position the lights to make a dramatic scene. The most prominent element is a bright light on the model, which overpowers the rest of the image. It is important to me that the viewer’s eye moves through the composition, and I use the point of view of the model as a guide for the viewer. Placing objects in the picture’s background as visual clues. 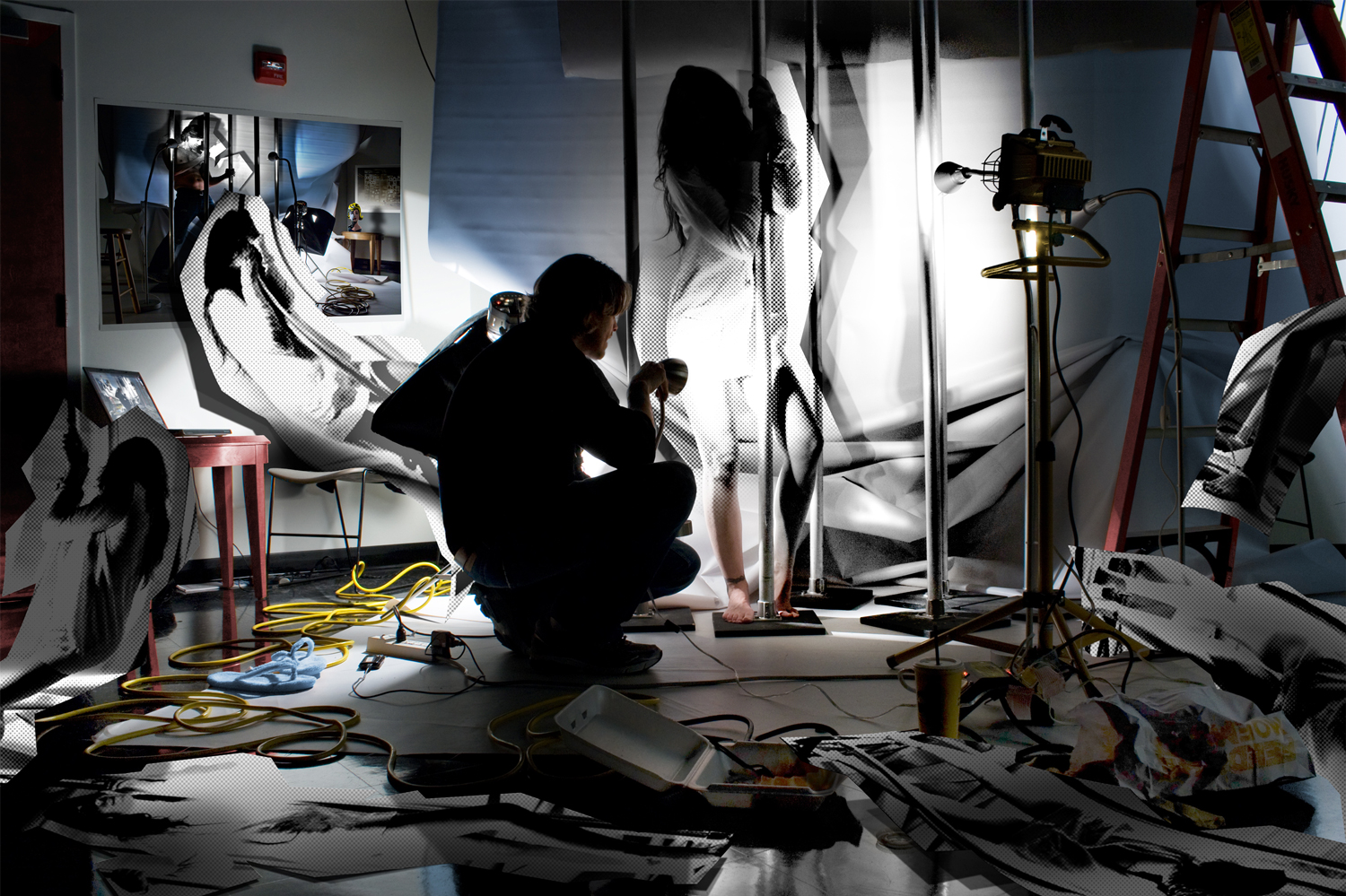 Serendipity
The image that sparked my thesis. I had done a dozen photoshoots in this space with the poles, lights, and backdrop. I didn’t know this image would be what it turned out to be until I was editing photos and started pushing the limits of the contrasting areas of light and dark, making the model overexposed. In my mind during the editing I was shining a light on the model from top to bottom to make copies of her. I’m caught in the act of shining the light on her mid section. I made copies of her in Photoshop and placed them around the room.